The UEFA Europa League round of 32 draw back in December threw up some extremely interesting fixtures. In a flash, two months have sped by, and these clashes are already upon us.

One of the most interesting battles to come out of the draw was Borussia Dortmund’s tie against Scottish champions Rangers.

The Gers have done astonishingly well in previous Europa League campaigns under the current Aston Villa boss Steven Gerrard but there were questions about whether the new manager Giovanni van Bronckhorst could carry on this excellent run.

On Thursday evening, Rangers made the trip to the Signal Iduna Park to take on Marco Rose’s Dortmund in the first leg and utterly blew the German side out of the water, winning 4-2 to take into the second leg in just a weeks’ time.

Rose has been under fire recently, following some inconsistent performances, and yet another trouncing has certainly not helped ease the pressure of his shoulders.

But what tactics were applied by van Bronckhorst to help Rangers come away with a memorable win against the Bundesliga giants?

Rose named an unchanged lineup for this crucial European tie from the one that easily disposed of Union Berlin on Sunday in a 3-0 victory. The 4-2-3-1 base formation remained in place as well against Rangers.

Swiss international Gregor Kobel was deployed between the sticks, protecting the goal behind a backline comprising of Raphael Guerreiro, Dan-Axel Zagadou, Mats Hummels, and Manuel Akanji.

Axel Witsel sat in the double-pivot alongside Mahmoud Dahoud whilst Marco Reus posited further up as the ’10’. Julian Brandt and Jude Bellingham flanked the 23-year-old Donyell Malen, although Bellingham played much more centrally throughout the game.

For Rangers, van Bronckhorst made just two changes from the side that dispatched Hibs 2-0 in the side’s last league outing.

Allan McGregor kept his place in goal, sitting behind a back four of Borna Barišić, Calvin Bassey, Connor Goldson and James Tavernier. John Lundstram and Ryan Jack were the double-pivot in Rangers’ 4-2-3-1, flanked by Ryan Kent and Scott Arfield. Joe Aribo occupied the number ‘10’ position, just in front of the prolific Alfredo Morelos who was utilised as the lone striker.

Without even needing to analyse the game, the possession statistics were very revealing in terms of the two tactical styles of each team. Dortmund wanted to dominate the ball, as is commonplace under Rose, while Rangers looked to sit deep, absorb pressure, and counterattack with purposeful efficiency.

Dortmund had the lion’s share of possession, with 66.7 percent of the ball and were relatively successful at progressing the ball from the first third to the second third. However, their inability to cut through Rangers’ deep defensive block was a constant detriment to the hosts throughout the match. But more on that later.

Employing Akanji as the right-back allowed Rose to create a three-man first line whilst Dortmund were in possession by tucking the Swiss defender inside alongside the two centre-backs and pushing Guerreiro up on the left flank.

This gave Dortmund a 3v2 with their backline against Rangers’ two-man first line of pressure as the Gers were defending in a 4-2-3-1/4-4-2 defensive block depending on the position of Aribo as the ‘10’. 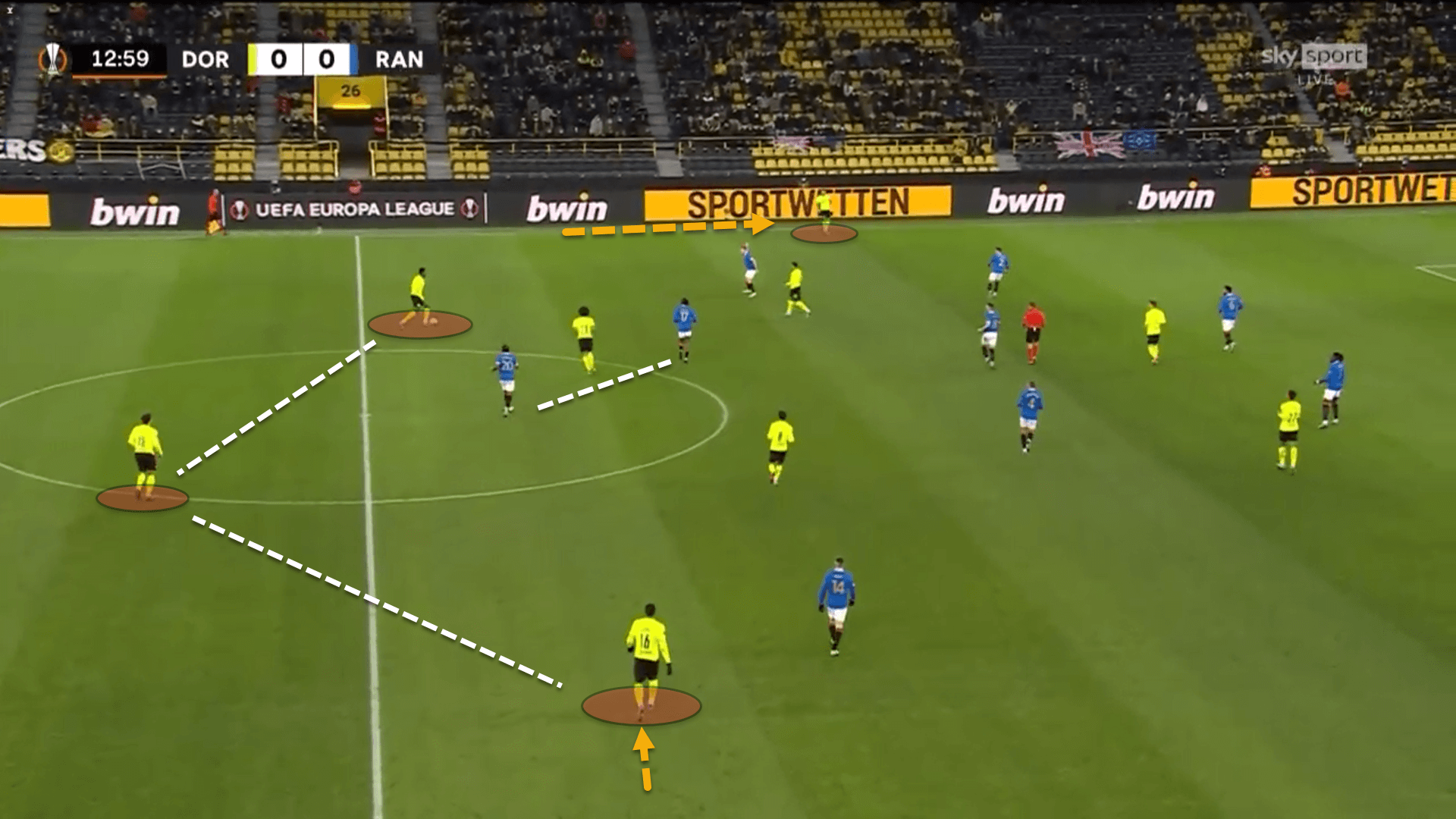 Former Manchester United manager Louis van Gaal uses this fullback-pivot tactic – one tucking inside and the other pushing up – with the Netherlands and considers its functioning as resemblant to a steering wheel.

Of course, with Akanji inverting, the width on the right side had to be provided by Brandt who hugged the touchline for the most part while Reus positioned himself almost as a second striker.

Bellingham, being a natural central midfielder operated in the left halfspace as Guerreiro was high on the left-wing.

Labelling formations when a team is in possession can be rather illogical given that players nowadays are not given strict positions. Instead, they are assigned roles and their placement within the structure depends on a plethora of different factors such as the space available and the opposition’s defensive shape.

Nevertheless, for the purpose of helping to roughly quantify their shape in possession, Dortmund’s formation in a positional attack was most emblematic of a 3-3-4 or a 3-2-5 depending on how high up Bellingham was positioned between the lines. 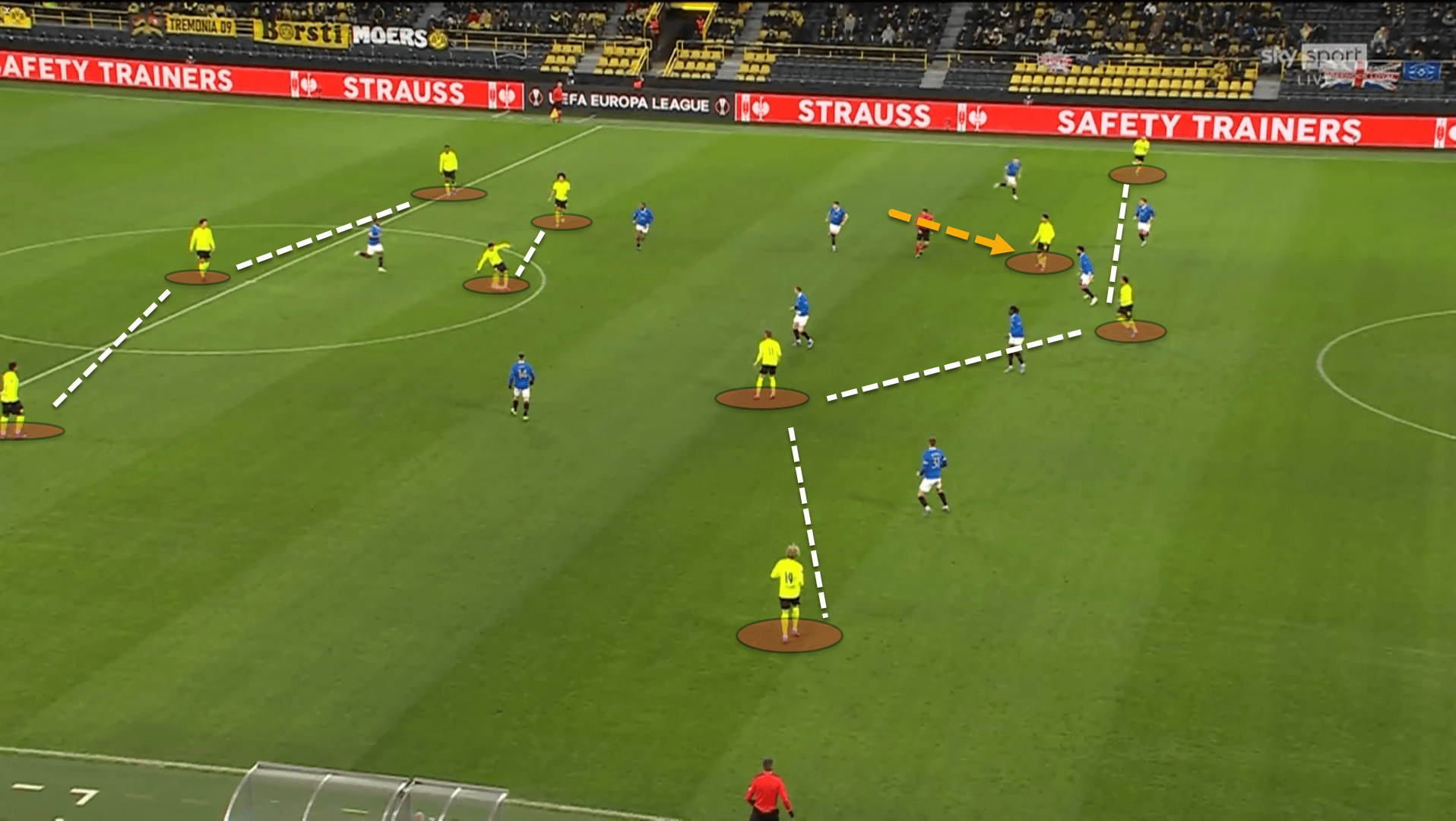 Marco Rose’s side tried to attack down the central corridors but were consistently denied by the determined visitors.

To combat this, the German giants tried to funnel the ball down the left channel and create overloads down this side in an attempt to break down Rangers’ defensive block. 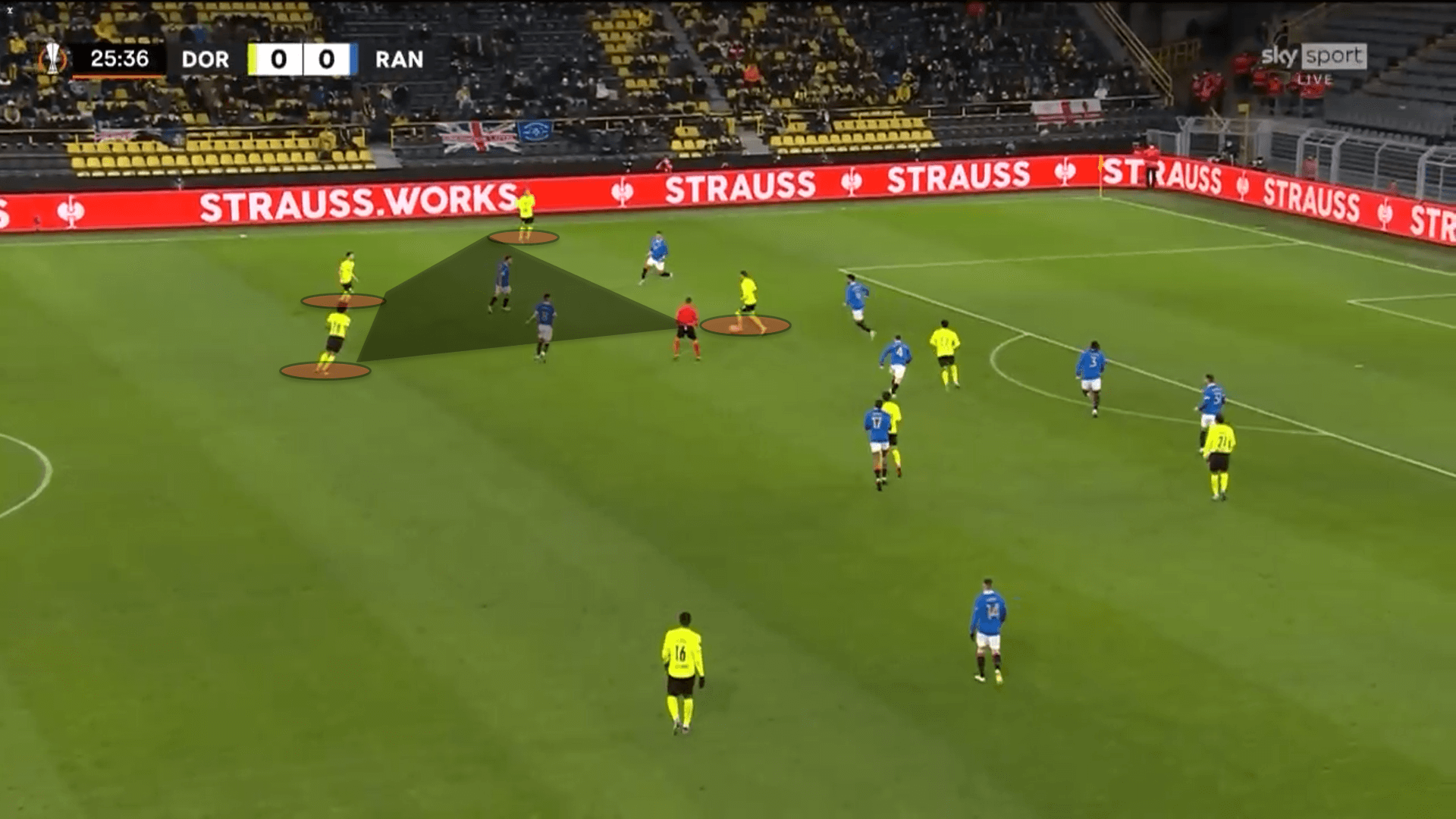 Nevertheless, this still didn’t work. Rangers were resilient and dogged, defending as a unit throughout the entire match.

Dortmund’s inability to play through the central areas, despite packing these spaces with numerous players, was not through choice, but because Rangers were negating their attacks to the wide areas.

Van Bronckhorst set his side up in a 4-2-3-1 base formation. This fluctuated between being a 4-2-3-1 and a 4-4-2 in certain defensive phases. As already stated, Aribo’s positioning was the deciding element in this.

The former Charlton Athletic midfielder was tasked with marking any Dortmund player who was sitting as the deepest pivot midfielder. Dortmund rotated quite a lot in the midfield area and so at times, Witsel had dropped the lowest to receive. Other times, it was Dahoud. 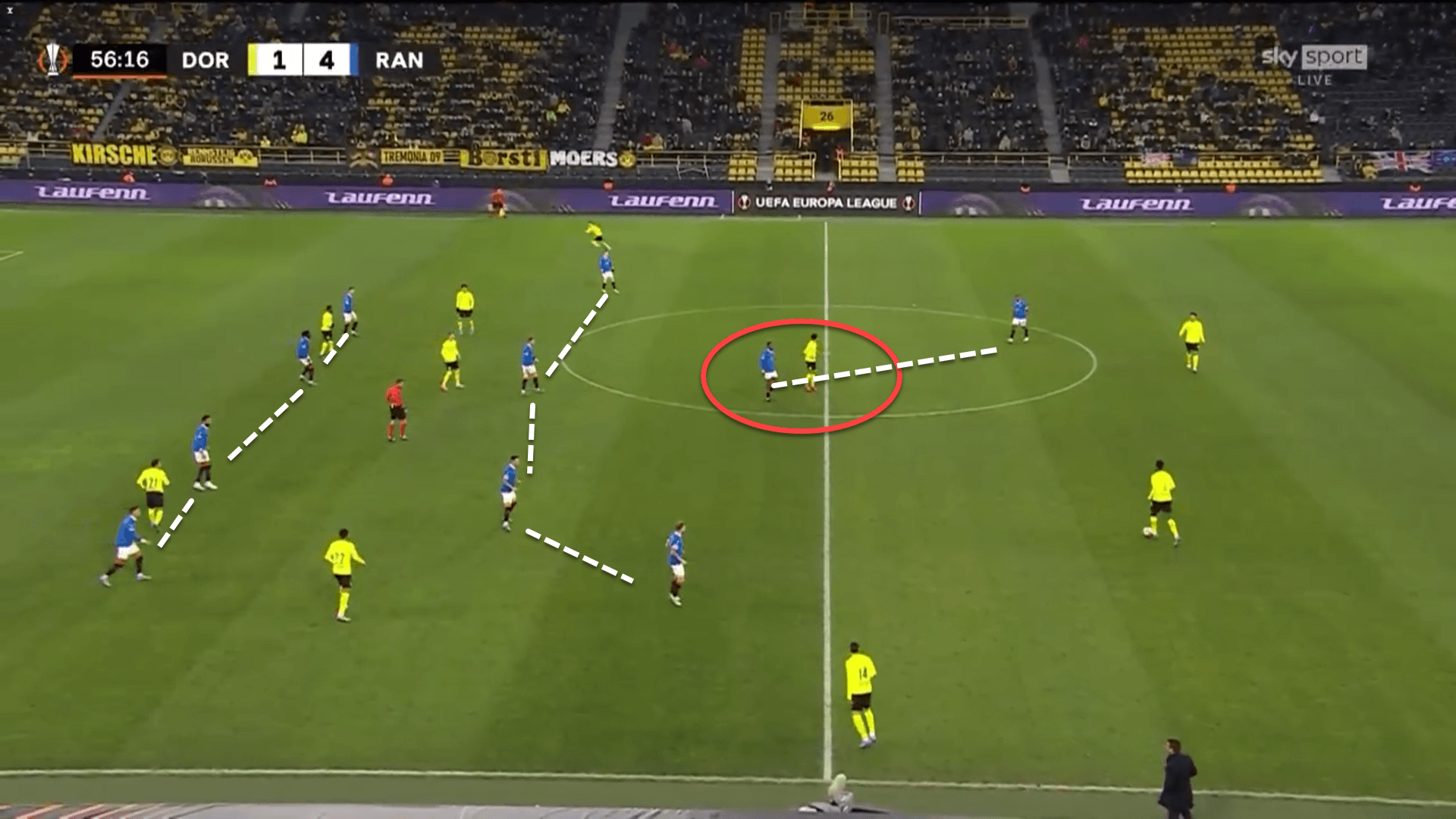 Aribo’s role was crucial as the number ‘10’ was the main negator of the British team in forcing Dortmund away from the central areas by blocking off any access to their deepest central midfielder.

On top of this, he was also instructed by van Bronckhorst to help Morelos press Dortmund’s centre-backs whilst cutting off the passing lane to the deepest midfielder in the meantime. In these instances, the shape would switch from a 4-2-3-1 to a 4-4-2 as pressure was applied to the Dortmund two central defenders. 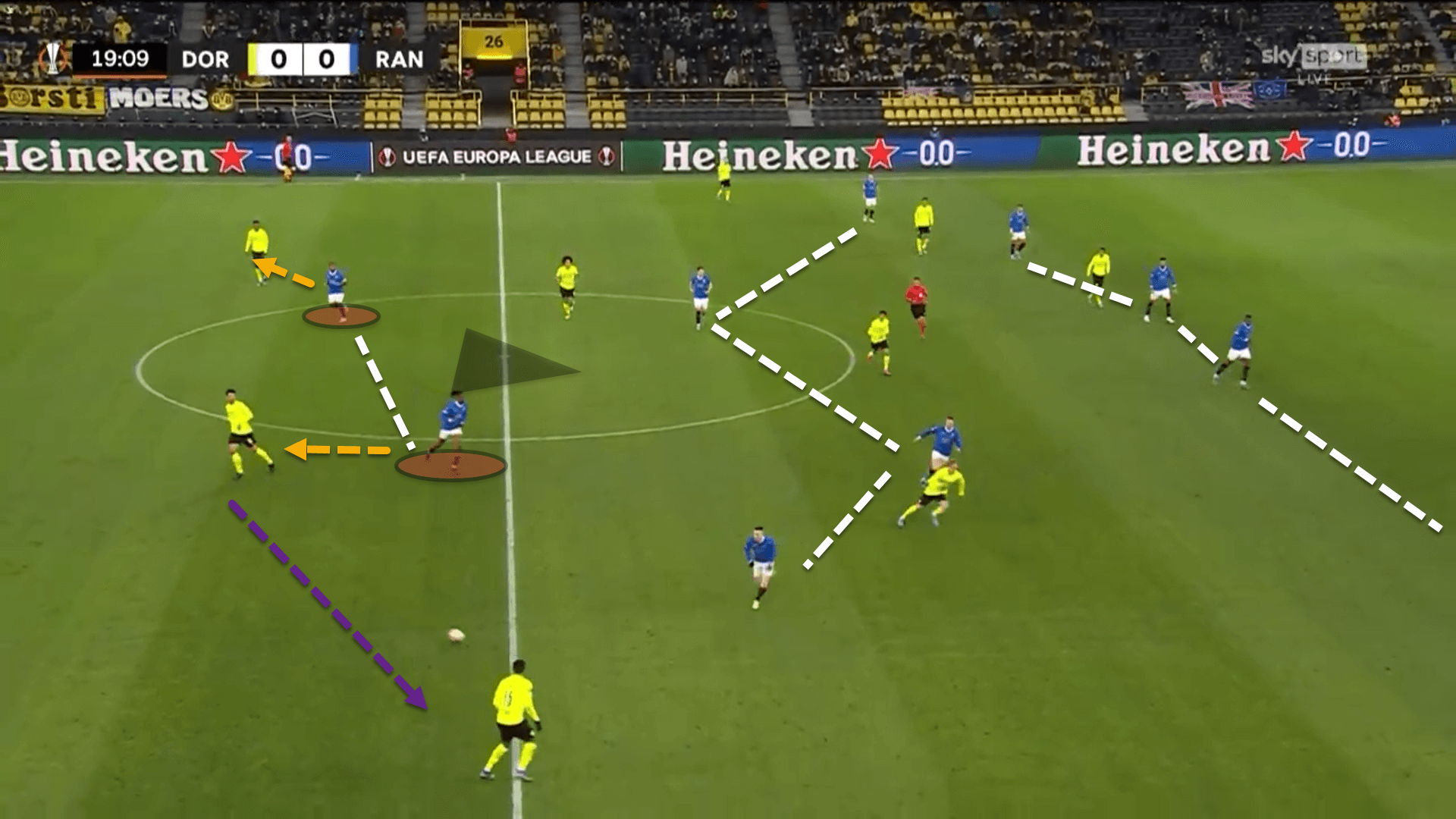 Dortmund overloaded Rangers’ midfield numerically and so had qualitative and numerical superiority for the most part. Generally, this would make central ball progression very easy. However, what the home team did not possess was positional superiority.

Positional superiority is when a player has time and space on the ball in a position between the opponent’s lines. Rangers drowned any players who received the ball inside their defensive block in a sea of blue shirts.

Despite Rangers trying to shuttle the Germans out wide, if Dortmund still managed to play through the lines of the defending team, the Gers would quickly close down the ball receiver to either force them out to the flanks or else to win possession of the ball. Often the centre-backs would need to be aggressive to aid this. 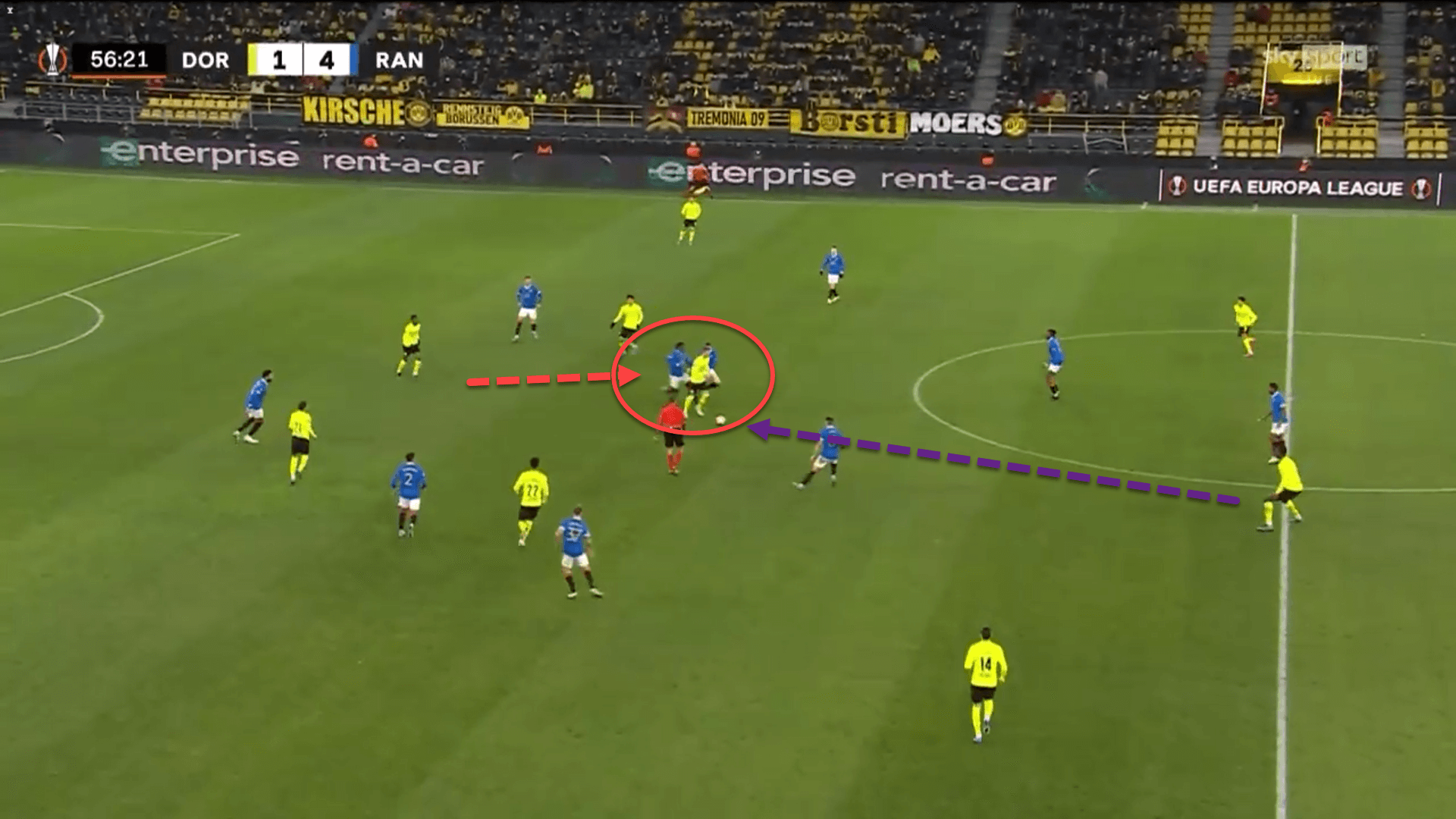 Here, Dortmund have managed to break through Rangers’ first and second line. Bassey, the left centre-back, has stepped out of position in order to jump Reus who received the ball with his back to goal. The German international ended up having to play the ball outside the opposition’s zonal block or risk losing it due to the aggressive nature of Rangers’ defending.

Dortmund found little to no space between the Scottish side’s defensive lines – a true testament to the compactness of their defensive block. They constantly forced the Bundesliga club to play on the flanks.

However, when Dortmund did move the ball out wide, Rangers’ gameplan was to drop the defensive block even deeper as to avoid direct passes to runners in behind their backline. 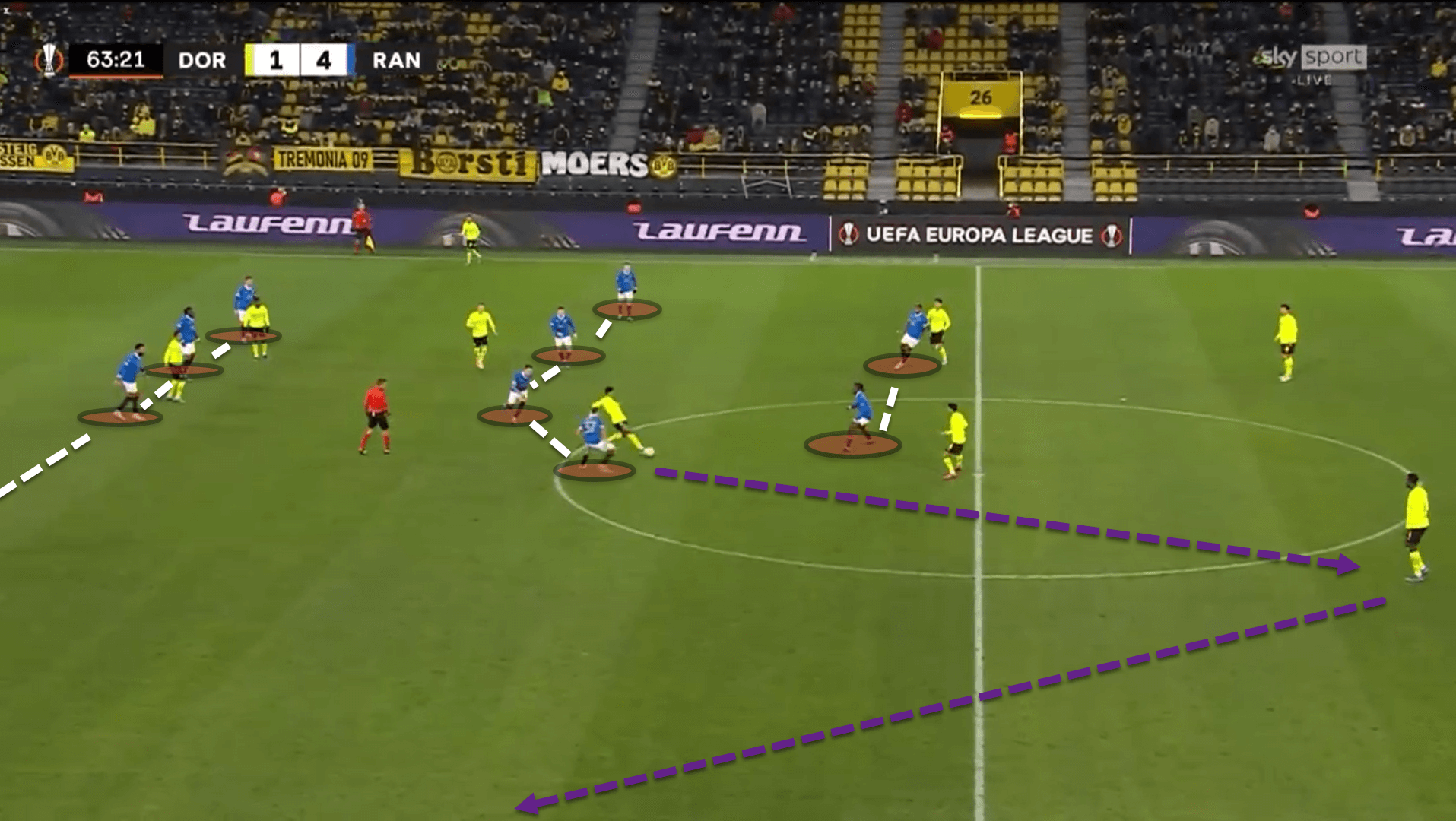 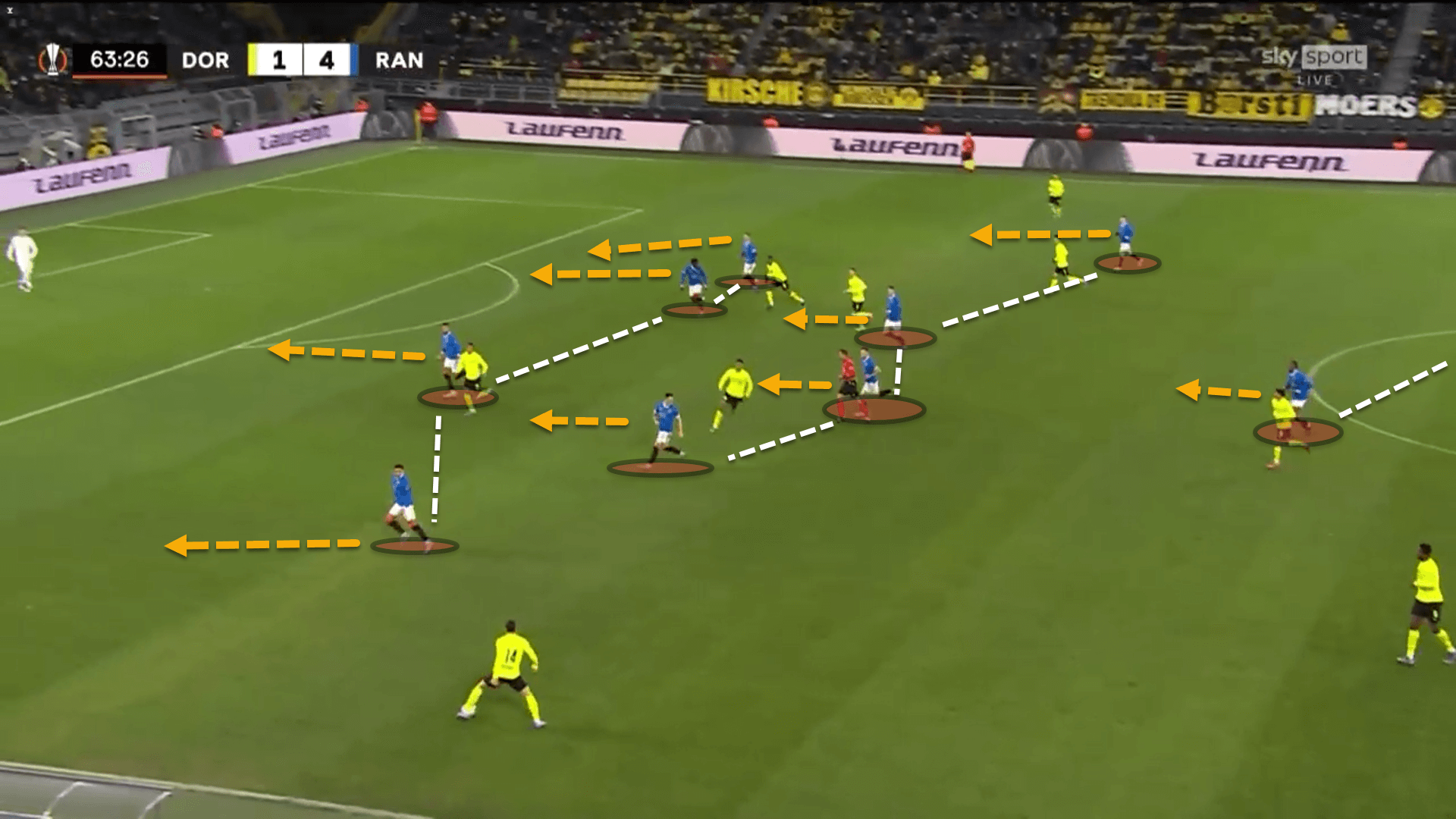 In this instance, Dortmund tried to play the ball through the central spaces, but Rangers forced them back outside. The Germans then switched the play to the sides and so van Bronckhorst’s men quickly dropped the defensive block to the edge of the 18-yard line.

Rangers remained relatively high and compact when the ball was central but once it was shifted wide they dropped deep to prevent balls in behind the backline. They did this incredibly well throughout the match and Dortmund found it extremely difficult to break the Gers down.

Rangers’ tactical plan when the ball was won in these deeper areas was simple: hit Dortmund on the break. Rose’s side play a very high line in possession and so there is a wealth of space behind the centre-backs for teams to attack into. The Light Blues did this excellently. 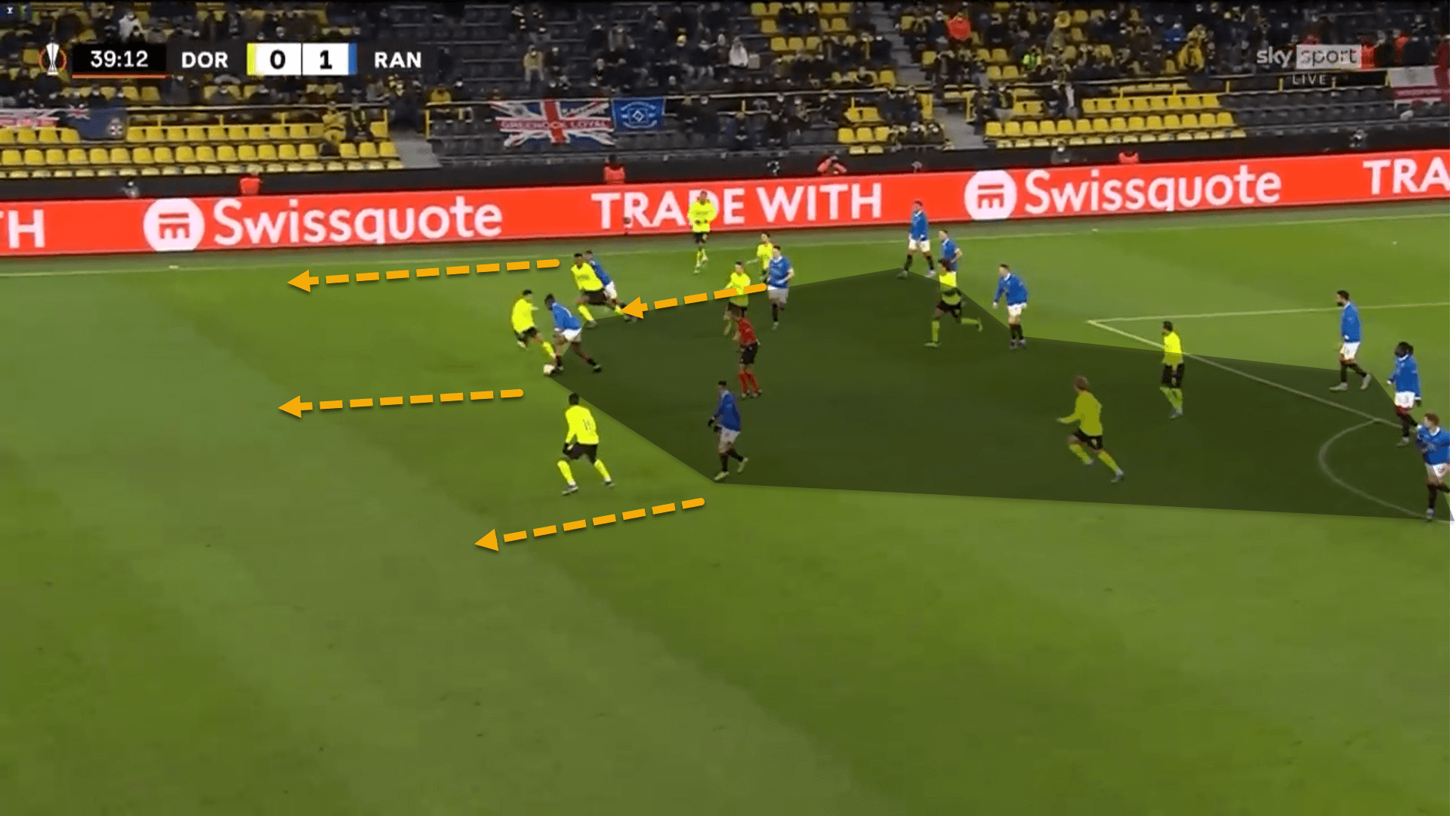 Once Rangers broke free from Dortmund’s initial counterpress, there was an obscene amount of space for the players to run into and create a well-worked attacking transition.

Two of the Rangers’ goals above came from transitions either directly or indirectly. The Scottish champions would attack with at least four players at once – two frontmen and two wingers – and sometimes one of the central midfielders would join the attack. 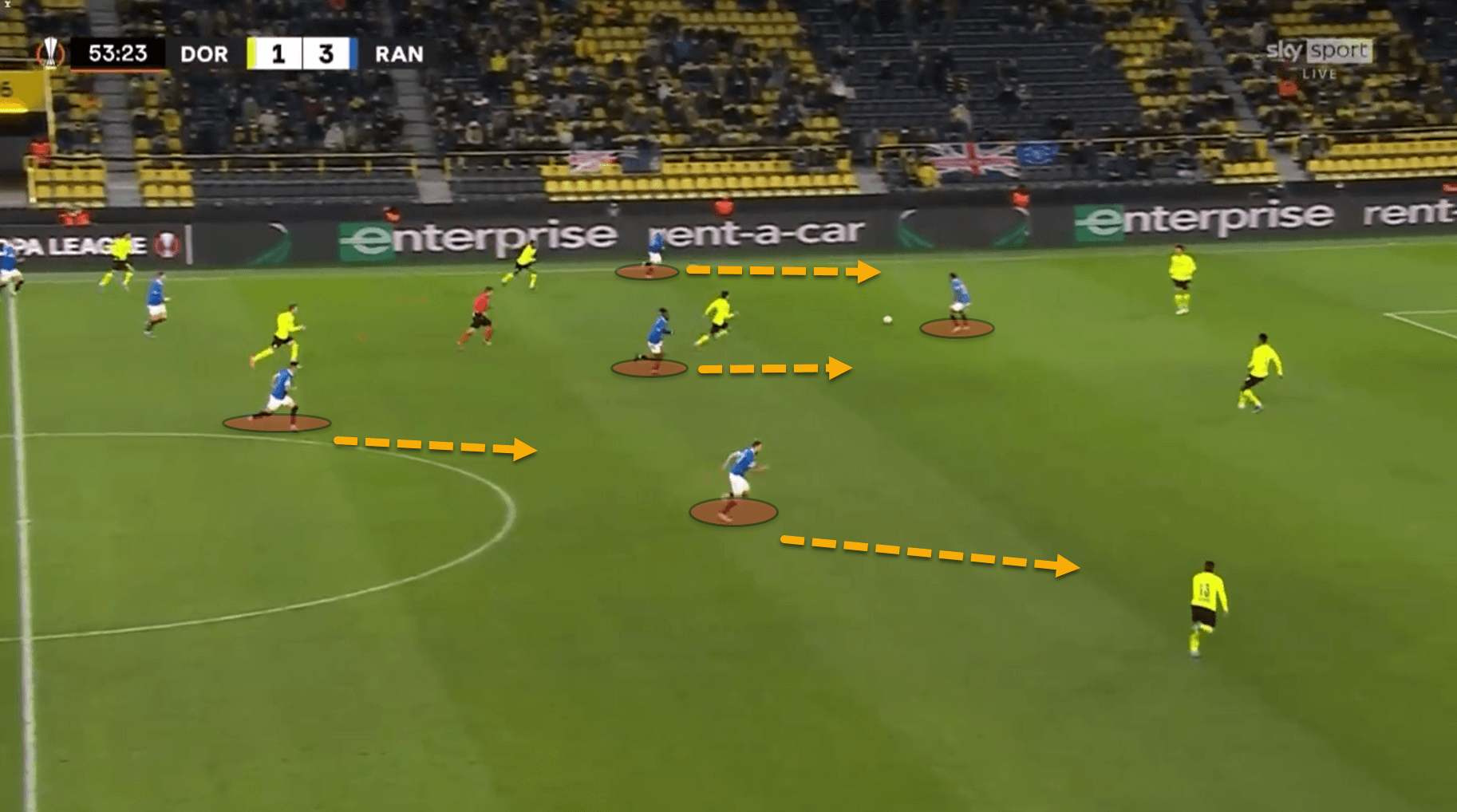 The counterattack depicted above led to Ranger’s fourth goal and was a wonderful piece of transitional play.

It was very clear to Rose that Dortmund’s 4-2-3-1 was not working and so the former Borussia Monchengladbach head coach changed his team’s shape after the half-time interval.

Witsel was replaced with Gio Reyna whilst Youssoufa Moukoko was swapped in for Brandt as Dortmund switched to a 4-3-1-2. Reyna was deployed on the right of the midfield three alongside Dahoud and Bellingham as Moukoko occupied one of the centre-forward roles. 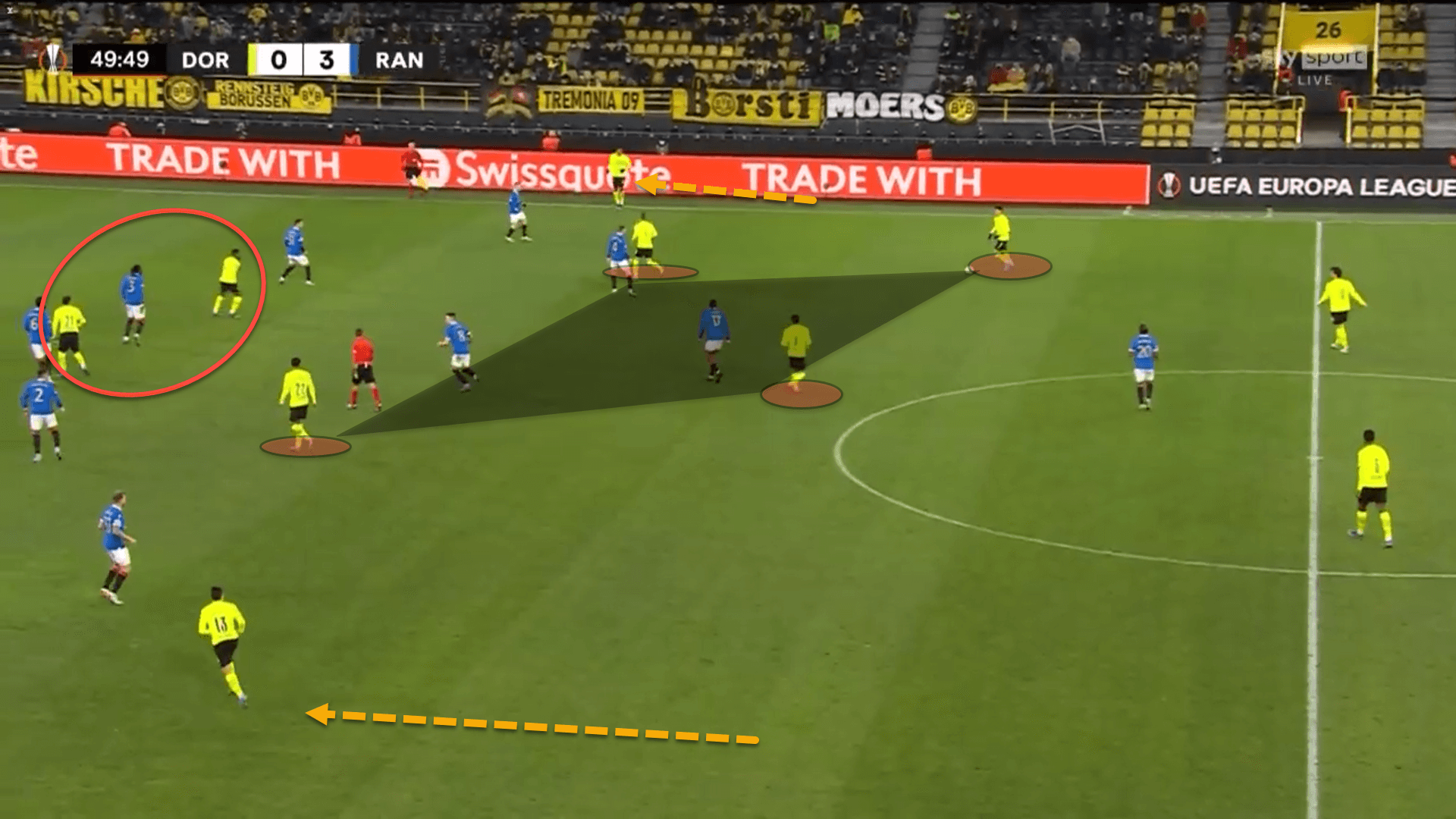 The formation change made little difference to the overall game and arguably made things worse as Dortmund conceded two quick goals in the 49th and 54th minutes. Both fullbacks were pushed higher on the flanks which left the Germans even more susceptible to counterattacks.

Ultimately, as the game wore on and players began to tire out, Dortmund began trying to play long balls into the channels by pushing multiple players forward at a time. Van Bronckhorst reacted to this after the hour mark by switching to a 5-2-1-2/3-4-1-2, taking Arfield off and bringing on American defender, James Sands, to play on the right of a three-man backline.

Kent pushed up alongside Morelos to create the two-man first line of pressure with Aribo maintaining his role behind the strikers. 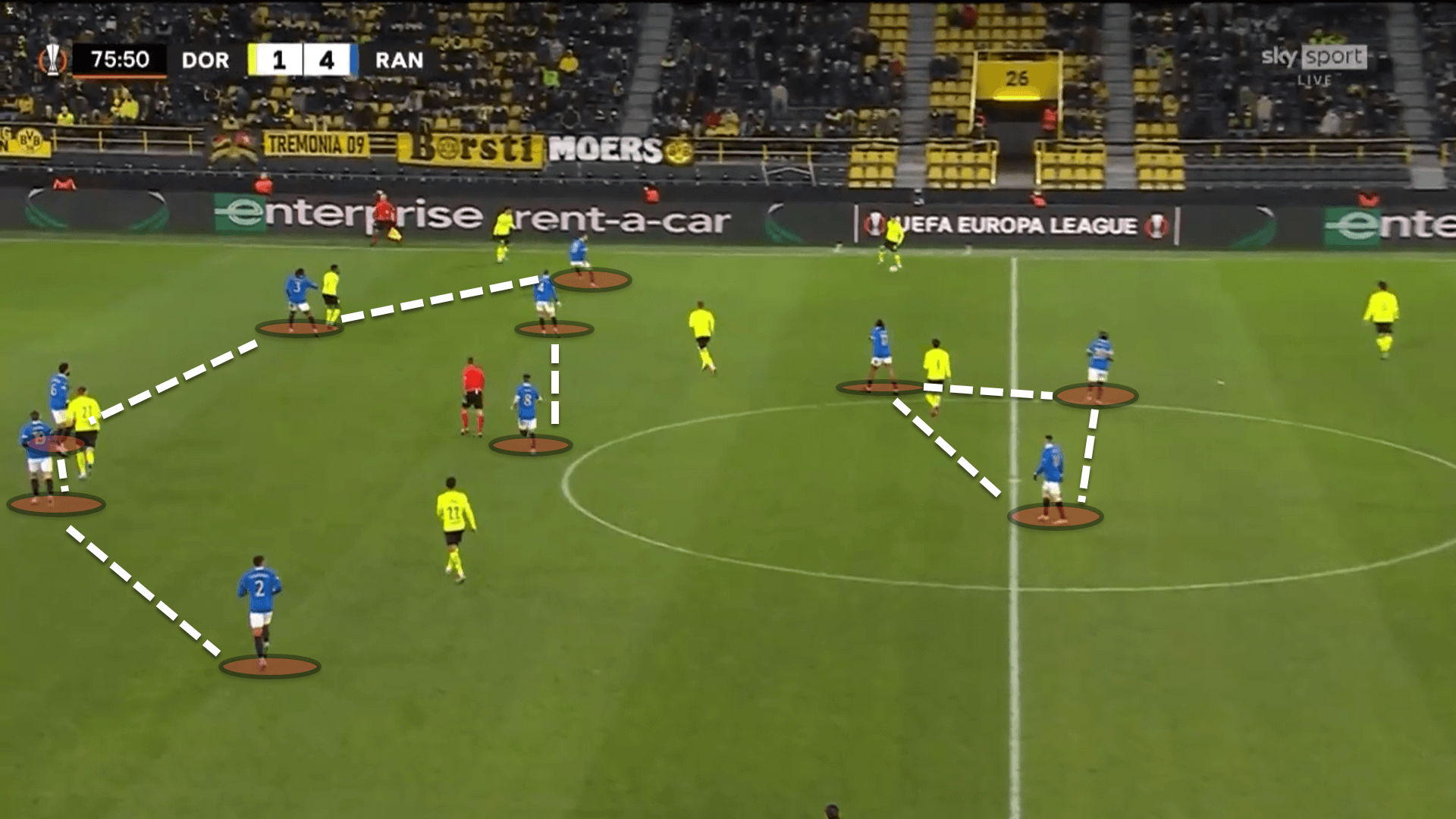 Rangers became better equipped to deal with the channel runs from Dortmund as they now had an extra man at the back and the Gers came out of the match relatively unscathed after the switch to a back five which was a very tactically astute decision by the Dutch manager.

From a neutral and analytical perspective, the match was extraordinary and is undoubtedly one of Rangers’ best European nights in recent history.

The Scottish side triumphed in Dortmund as van Bronckhorst won the battle of the minds against Rose. The German manager will certainly be under pressure to get a result in the second leg at the Ibrox now and despite Rangers’ emphatic victory on Thursday night, the tie is far from over.